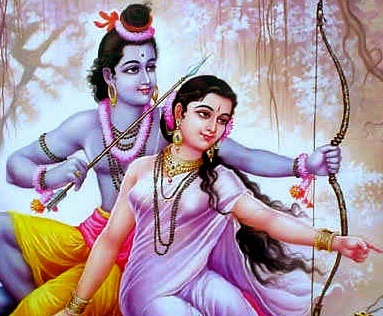 www.dipika.org.za - On 8th May is a very important day in the Hindu calendar and on this day the 9th day of the bright moon in Vaisakha Month falls Sita Navami--the day when the Mother Earth (Dharti Ma) gave birth to Srimati Sita-devi.
We all celebrate Raam Navami (the birthday / appearance day of Shree Raam) in such great pomp and splendor yet this day of His wife goes by unrecognized. In my humble opinion I think that this day is as important or maybe even more important than Raam Navami.
One cannot go to the father without getting the blessings of the mother and in the same way we seek the divine blessings of Mother Sita to take us to Shree Raam. Without Mother Sita Lord Raam is incomplete and vice versa. 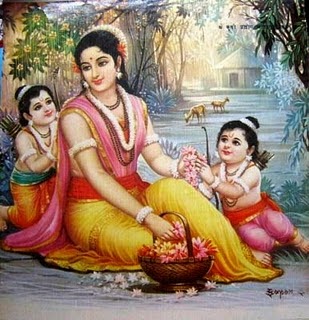 King Janaka in the Ramayana explains: "One day, when I was ploughing the fields, I found Her under the ploughshare and gave her the name Sita. Thus after emerging from the earth itself, She has grown up in my care."
Thus was born the most famous Devi in history.
The katha (narration) of Her birth, marriage, exile, abduction, (in) famous agni-pariksha (fire ordeal), and banishment is not only known and loved in Bharat (India), but throughout South and Southeast Asia and, indeed, in much of the rest of the world as well.
Whether conveyed through music and mime, poetry, popular folk tales, dramatic performances, video, comic books, epic narrations, the katha of Sita has captured the hearts of billions of people. To this day She is India's most favourite Devi. Jai Shreeeee Sita-devi.

Yesterday, Hindus all over the world celebrated Sita-navami, the appearance day of Srimati Sitadevi, the eternal consort of Lord Ramacandra. This year Sitanavami falls on 08 May. Normally, devotees fast till noon and the devotional program usually includes Shobha yatra with Deities of Sri Sri Sita Rama. Srimati Sita Devi is the daughter of the Earth goddess, Bhumi Devi, and central figure of the Ramayana. In Maharishi Valmiki's own words, Ramayana is known as the noble story of Sita "Sita-ayah  Charitam Mahat". Her glories are sun by the poet-saint Thyagaraja in his "Sri Janakatayane", "Oh daughter of Janaka, the blessed souls of refugees!  Oh Consort of Sri Raghu Rama, bedecked with shining gem-ornaments! Pray, protect me always! You are the wind that destroys the clouds of demons like the hundreds-headed Ravana; You are the indweller in the hearts of the devotees; Your Feet shine with the lustre of gems set in the crown of Indra." Also, in the "Shri Ramashtakam" written by Shrila Murari Gupta, we read: "In Her upraised hand Sita Devi holds a thousand-petalled lotus flower, and Her five graceful fingers make it appear that the flower's hundred petals are covered by another five petals. I forever worship Rama, best of the Raghu dynasty, by whose side forever remains this Sita, whose radiance is like molten gold." Our spiritual masters have taught us that we should follow lots of teachings that Mother Sita Devi has given us. One is to be firmly attached to our bhajan and remains always bound to our Lord. When Rama's exile pastime came, Rama proceeded to Sita and asked her to stay behind, but Sita begged, "Have pity on me. A wife's position is always beside her husband. Don't leave me behind. I'll die without you." At last Rama permitted Sita to follow him. So, in this auspicious day, we pray to Mother Sita's for Her divine blessing in keeping strong our faith and reviving our desires to serve our Guru and the Vaishnavas. (Editor's note). 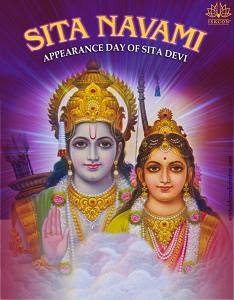 Srimati Sita Devi is an eternal consort of Lord Ramachandra. She is known to be the daughter of Bhumidevi, the goddess of earth. In Treta-yuga, she appeared to King Janaka in Mithila while he was ploughing the earth. She was later married to Lord Ramachandra and joined him when he was banished to the Dandakarnaya forest. Despite being kidnapped by the demon King Ravana, she remained faithful to Lord Rama, who eventually killed Ravana. She had two illustrious sons Luv and Kush. She is addressed by several names such as Maithili (princess of Mithila), Janaki (daughter of Janaka), Rama (wife of Lord Ram), etc. She is a central figure in the Ramayana and an embodiment of qualities such as chastity, forgiveness, self discipline, simplicity and gratitude. Srimati Sita Devi is also the manifestation of the goddess of fortune. On her auspicious appearance day, devotees can aspire for Their Lordships Sita Rama to bestow sincere devotional service and qualities upon them.