SEEING EACH PERSON AS A CHILD OF GOD 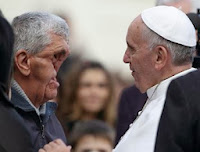 www.huffingtonpost.com - While many spiritual leaders preach the importance of compassion, Pope Francis gives us all yet another example of what it really looks like to live a compassionate and caring life. Just weeks after a photo of him kissing a man with a rare skin disorder moved many to tears, another picture was taken showing the pope embracing a man with a severely disfigured face. The Pope spoke to him and blessed him after his general audience in St. Peter's Square at the Vatican on Wednesday, Nov. 20. At the end of each general audience, the Pope usually dedicates some time to greeting the sick and disabled people that come to meet him.
Vinicio Riva, the man with neurofibromatosis, told the media that he “felt only love” as the Pope embraced him in Saint Peter's Square in Vatican City, on 06 November 2013. 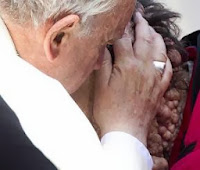 Though Vinicio Riva's face was disfigured, the Pope laid his hands on his head and screwed his eyes up tightly in prayer. Though Riva has neurofibromatosis type 1, which presents as a disfiguring skin disorder, Francis opened his arms and embraced him tightly. Riva gave an exclusive interview to Italian magazine Panorama, where he described the loving moment. No words were exchanged, just the healing comfort of touch. “I tried to speak to say something but I was unable to,” said Riva in a translation provided by Time.
“The emotion was too strong. It lasted a little longer than a minute but it felt as if it were eternity.” Earlier in his general address, the Pontiff asked the assembled crowd to pray for a sick little girl that he had just met. Pope Francis tweeted earlier this year, “The Pope must serve all people, especially the poor, the weak, the vulnerable.”

Pope Francis has made international headlines once again last month. His compassionate nature towards people who suffer was shown publicly after a mass in St. Peter's Square, Rome, Italy. First, he tenderly comforted a man suffering from a rare skin disorder, kissing him on the head and caressing the whole face. Some weeks later, the Pope blessed and embraced a middle-aged man with a severely disfigured face that had large portions of his facial features missing, including his nose and forehead. Last week, the Pope encouraged all people to take care of the needy in a tweet: “Take care of God’s creation. But above all, take care of people in need.” Compassion and Love are not feelings - they are actions. Although we already have some degree of compassion, at present it is very biased and limited. We need to increase the scope of our compassion until it embraces all living beings without exception. Our spiritual masters have taught us that true compassion is to learn how to preach because preaching is truly love; it is love in action. Compassion is the very essence of a spiritual life and the main practice of those who have devoted their lives to serving God, and most importantly of all, helping others to return to the Supreme abode. (Editor's note). 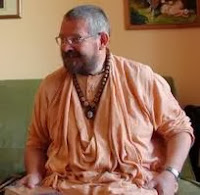 Compassion should be the main impact of our lives. Compassion with oneself don't lead us to anything, only calls the attention of the negative. This really means not having compassion, because you think you are the only one that gets the worst of all. ... When will come the moment that I feel compassion for others? Which are going to be your plans for injecting Krishna Consciousness to the different mentalities? When will you fill with the desire, the strong enthusiasm of making something wonderful today? Having compassion for others is already a wonderful thing. We can add to this a humble attitude; not getting angry with anyone and also thinking that everyone is mistaken in a mental tramp. Having compassion, is only a word. Having compassion in Krishna consciousness means understanding that people needs Atma Jnan, so they can have an understanding of their position. Without this people don't understand the most important. This means knowing that we are a spiritual beings and essentially servants.