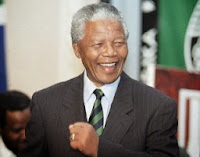 - Nelson Mandela, the former political prisoner who became the first president of a post-apartheid South Africa and whose heroic life and towering moral stature made him one of history’s most influential statesmen, died Dec. 5. He was 95. To a country torn apart by racial divisions, Mr. Mandela became its most potent symbol of national unity, using the power of forgiveness and reconciliation to heal deep-rooted wounds and usher in a new era of peace after decades of conflict between blacks and whites.
To a continent rife with leaders who cling to power for life, Mr. Mandela became a role model for democracy, stepping down from the presidency after one term and holding out the promise of a new Africa. And to a world roiled by war, poverty and oppression, Mr. Mandela became its conscience, fighting to overcome some of its most vexing problems. 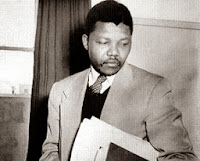 He was a Nobel Peace Prize laureate who spent 27 years in prison as part of his lifelong struggle against racial oppression. Throughout this moral and political fight, Mr. Mandela evoked a steely resolve, discipline and quiet dignity, coupled with a trademark big, charismatic smile. He ultimately carried them into office as South Africa’s first democratically elected and black president. His victory capped decades of epic struggle by the African National Congress and other liberation groups against South Africa’s brutal white rulers, first under British colonialism and then under a white-run system called “apartheid,” or racial separation.
Under Mr. Mandela’s leadership, South Africa slowly began eradicating racism from its legal canon, governmental institutions and school textbooks. A new Constitutional Court was inaugurated in 1995 as the highest court in the land.

Nelson Mandela dies at age 95. In an extraordinary life that spanned the rural hills where he was groomed for tribal leadership, anti-apartheid activism, guerrilla warfare, 27 years of political imprisonment and, ultimately, the South African presidency, Nelson Mandela held a unique leadership cachet that engendered respect and awe in capitals around the globe. The world remembers a great leader who fought to establish equality among human beings. Obviously, the lack of spiritual knowledge is the main cause of the constant competition between individuals, social groups, races and nations to control the wealth, power and prestige. The true platform for social equality and cooperation is not to declare that “we are all equal”, because although from a spiritual vision we all have the same Heavenly Father, in the material world there are many differences. Some have good qualities of life, health, education, intelligence, while others lack even the basic minimum resources to survive. Knowing that the Supersoul ( Paramatma ) is present in every soul and every material body, we must be aware of the true spiritual nature and also help all to achieve an appropriate balance between the material and spiritual life goals. It is not enough to proclaim that we are equal. We must take a step beyond that and accept that differences exist and therefore we are responsible for caring for those with less facilities. True compassion means that anyone who has more qualities or resources has to use them to protect those who do not have and also strive to give the best of all: help others awaken spiritual awareness. (Editor's note). 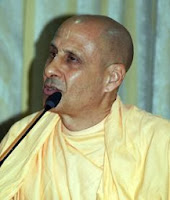 Universal brotherhood is spontaneously manifested in the heart when we know our father and mother. So we find the great saints of great traditions throughout history offering respect, love, and compassion to all living beings. Social equality is only real when it’s actually from the spiritual platform. On the spiritual platform there is total equality because we are not these bodies. We are not black, white or yellow; we are not Indian, Pakistani, American, Russian, African or Chinese; we are not men or women, rich or poor; we are not brahmans, kshatriyas, vaishyas, shudras or untouchables. We understand these to be temporary designations. Through political or philanthropic propaganda, to try to create equality has many limitations. In his famous address at the Lincoln Memorial in Washington DC, Martin Luther King proclaimed, “I have a dream that one day people will be judged, not by the color of their skin, but by the content of their character.” He was a religious man.

Did you know you can shorten your long links with Shortest and receive money for every click on your shortened links.