HISTORY OF YOGA IN RUSSIA 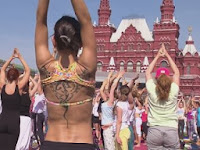 http://indrus.in - Yoga was enjoyed by quite a large number of people in Imperial Russia, and this laid the roots for its absorption into Soviet culture. From the end of the 19th Century and right up until the 1920s, when the USSR was formed, Indian philosophy and yoga were popular amongst the artistic and intellectual communities. The books of American writer William Atkinson, who wrote under the pseudonym Yogi Ramacharaka, were published - works which included: Hatha Yoga, Jnana Yoga, Lessons in Yogi Philosophy and Oriental Occultism, and The Science of Psychic Healing.
Besides Atkinson's works, other published works included Svami Vivekananda's book on Raja Yoga, Yoga Sutra by Patanjali, which came out with the Russian title of “Patanjali's Aphorisms”, and Bhagavad Gita was also republished. 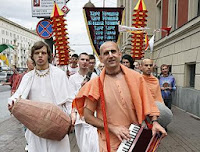 Interestingly, Bhagavad Gita first appeared in Russia under the reign of Ivan the Terrible (1530-1584). The manuscript was sent to the tsar as a gift from one of the Great Moghuls. Its first translation into Russian (from English and Sanskrit) was published in 1788 by Imperial decree of Catherine the Great and with the endorsement of the Holy Synod (“this book is good for the soul”), with typography by Nikolai Novikov. Information about yoga during the dark, harsh, Stalinist times is hard to come by. But yoga was still very much in existence, practiced by a tough core of brave people. These dedicated yogis and yoginis mainly practiced in camps, and yoga was undoubtedly a factor in helping them to survive the inhumane conditions.
From the appearance of the first books on yoga to the founding of the first official yoga schools, the path of popularizing yoga in Russia has been long and windy, but not without its interesting moments.

This interesting article on the history of yoga in Russia thru the present day, was written by Olga Kazak from the Yoga journal.  It is curious the fact that the interest in yoga flared up during the dawn days of the Soviet Union and really took flame during the sunset years of the red empire. As the writer says, “It is hard to imagine how and in what direction yoga would have developed in Russia, if it weren't for the many years during which yoga was practiced behind closed doors, in an atmosphere of danger and secrecy (after all, yoga was an offense for which you could be put in prison), and also the limited access to information about yoga.” With respect to the path traveled by the Vaishnavism in Russia, the one who gave it the big push was Srila A.C. Bhaktivedanta Swami Maharaja. He was so anxious to have Krishna Consciousness  reach every country in the world and he also had a plan to bring God into godless Soviet Russia. However, the early days were very difficult for Srila Prabhupada's disciples. In 1977 Communist Party leader Leonid Brezhnev became head of state, and by 1980, several ISKCON devotees had been imprisoned simply because of their faith. In 1982 Yuri Andropov was determined to wipe out all things religious, and he increased the campaign against ISKCON. Semyon Tsvigun, his deputy chief of the KGB, announced that the three foremost threats to the Soviet Union were “pop music, Western culture, and Hare Krishna.” Intense persecution of Hare Krishna devotees ensued. Many were thrown into prisons, labor camps, and psychiatric hospitals. Yet despite being cruelly tortured and seeing their friends die around them, they clung to their devotion, refusing to give up Krishna consciousness. (Editor's note). 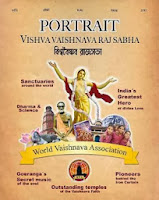 When Srila A. C. Bhaktivedanta Swami Maharaja went to America, the Cold War between communism and capitalism was going on intensively. The communist countries were gaining influence after winning the war in Vietnam and nobody in the world could imagine that there could be a change in the situation. Srila A.C. Bhaktivedanta Swami Maharaja systematically sent His followers to penetrate the so-called “iron curtain” behind communism, where an atheistic philosophy and form of government was flourishing. Swami Maharaja's initial strategy emerged when he met a young Russian seeker, Anatoly Pinyayev, who would soon become Ananta Shanti Das. Ananta Shanti was Swami Maharaja’s courageous and lone student in the Soviet Union and would later be responsible for opening many centers all over Russia. … While enduring more trying times, the devotees saw considerable success ... (they) chanted regularly on Moscow streets, distributed prasadam widely and put over 160,000 books into Russian hands.