THE LEGENDS OF TULASI IN CHRISTIANITY 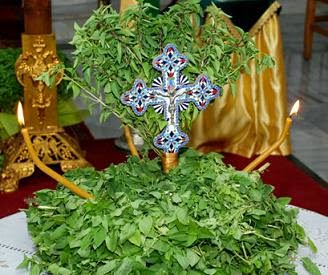 www.indiadivine.org - Among Vedic practitioners, Tulasi "The Incomparable One", is vital in the worship of Lord Vishnu. As Vrinda Devi she arranges the pastimes of Sri Sri Radha Krishna in the forests of Vrindavan. Devotees always offer food to the Lord accompanied by a leaf from Tulasi. In addition, Vaishnavas chant on and wear sacred beads made of her wood, and in some traditions anoint their body with sacred clay in the form of her leaf.
For thousands of years Tulasi was worshipped in India and slowly made its way westward via trade routes linking India to Persia and Greece. Many may not know that Tulasi plays an important role in Orthodox Christianity (including Greek, Bulgarian, Serbian, Macedonian, and Romanian Orthodox Churches).

According to Orthodox tradition when the disciples of Jesus went to the tomb of Christ they found it empty but all around the area were fully bloomed Tulasi. The Greeks called Tulasi 'Holy Basil', from the Greek word 'basileus' meaning King/royalty for it was reserved for the greatest.
Several hundred years later, Helena, the mother of Emperor Constantine, made a pilgrimage to Jerusalem in search of holy relics. It is said she found a barren hill covered in sweet smelling Tulasi, and upon excavation found the true cross beneath the Tulasi plant. Because Tulasi was discovered both at the cross and tomb of Christ, traditional Orthodox Christians saw it as a symbol of paradise, of spiritual rebirth and sanctity. This is simply one example of the influence of Vedic culture upon the world.

The author of this interesting article shows that this sacred plant was cultivated in Christian Orthodox monasteries and became part of the most holy rituals - it is used to create the holy water, to sprinkle the holy water on practitioners, to create the holy oils to anoint, to adorn the altar, and to garland the cross. Even priests circle the sacred plant during the ceremony! All of this seems is very similar to the celebrations and rituals described in the Vedic tradition of knowledge. The Vedic literature explains that Sri Vishnu, and particularly Sri Krishna, are closely associated with Tulsi. Tulasi is a manifestation of Vrndadevi, the forest gopi. She appears in this form in Vaikuntha and on earth as well. If one worships the Tulasi plant, following in the footsteps of the spiritual master, one will surely make rapid advancement in spiritual life. Now, we learn from Christian sources that Jesus Christ is also associated with Holy Basil. Although Tulsi and Holy Basil are not exactly the same plant, they are related and this is more than a “divine” coincidence. Our spiritual masters have already taught us, there is many connections between Christianity and the Vedic culture - the most ancient surviving spiritual and mystical traditions on the planet, which has shaped Hinduism as we know it today. (Editor's note). 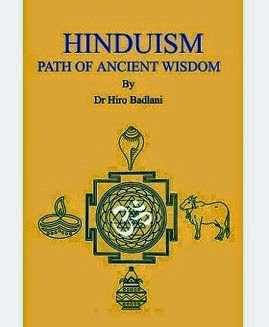 Hindus worship Tulasi, the basil plant. Tulasi occupies a very exalted position in Hindu mythology. Tulasi becomes wedded to Lord Vishnu. In the worship ceremony, no offering is complete without the tulasi leaves. It has been identified as a sacred and spiritual entity, just as the cow has been exalted in a similar position. It also represents an honor to the agriculture product in Hindu society. Ayurveda has described many good benefits accruing from the use of the basil plant. Many Hindus grow this plant and water it with their own hands, along with chanting a prayer or Gayatari Mantra. In general Hindus have a respectful attitude toward all plant life, considering it sacred. The recognition of plants in human society vindicates their good ecological attitude from ancient times.

There's a chance you're qualified to receive a $1,000 Amazon Gift Card.

Did you know you can shorten your long links with Shortest and get money for every visitor to your shortened urls.