Arbil, Iraq (Reuters) - The Islamic State group said it enslaved families from the minority Yazidi sect after overrunning their villages in northwestern Iraq, in what it praised as the revival of an ancient custom of using women and children as spoils of war. In an article in its English-language online magazine Dabiq, the group provides what it says is religious justification for the enslavement of defeated “idolators”.
The ancient custom of enslavement had fallen out of use because of deviation from true Islam, but was revived when fighters overran Yazidi villages in Iraq's Sinjar region. “After capture, the Yazidi women and children were then divided according to the Shariah amongst the fighters of the Islamic State who participated in the Sinjar operations, after one fifth of the slaves were transferred to the Islamic State's authority to be divided as khums,” it said.

Khums is a traditional tax on the spoils of war. “This large-scale enslavement of mushrik (idolator) families is probably the first since the abandonment of Shariah law,” it said. Islamic State practices a harsh form of Sunni Islam and has declared its leader Abu Bakr al-Baghdadi the ruler of the entire Muslim world. Mainstream Sunni scholars around the world have denounced the group and its interpretation of Islam.
“One should remember that enslaving the families of the (non-believers) and taking their women as concubines is a firmly established aspect of the Shariah,” the article said. The group has hounded ethnic and religious minorities in northern Iraq since seizing the city of Mosul in June, killing and displacing thousands of Christians, Shi'ite Shabaks and Turkmen who lived for centuries in one of the most diverse parts of the Middle East.

This news released by Reuters news agency, is about a Dabiq article on slavery that unfortunately confirms practices documented by Human Rights Watch, which says Yazidi women and girls were forced to marry Islamic State fighters and shipped out in busloads from Iraq to Syria to be sold off as prizes. Last week, Human Rights Watch said Islamic State was holding hundreds of Yazidis captive in both Iraq and Syria and that the group had systematically separated young women and teenage girls from their families, forcing some into marriage with fighters. The Dabiq article said fighters were reviving a practice of the companions of the Prophet Mohammad by enslaving enemies. “Enslaving women and forcing them to become wives reduces sin by protecting men from being tempted into adultery,” it said. Yazidis, who follow an ancient religion derived from Zoroastrianism, have faced some of the harshest penalties from Islamic State, which regards them as devil-worshippers. Many of the captives had “willingly” accepted Islam, the group said, “and now race to practice it with evident sincerity after their exit from the darkness of idolatry”. How terrible! A lot of cruelty in the name of religion. Cruelty acts toward women and innocent creatures causes great disturbances in the world. What is worse, when irresponsible men, under the guise of defending a religion, satisfy their uncontrolled desires by raping women and girls. A bonafide religion must teach that we are all spiritually related and, therefore, it should be very easy for believers to find similarities among the essential principles of all religions and ignore their differences. (Editor's note). 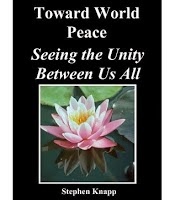 Regardless of which religious system you choose, they all have the same purpose, and they all give the same principles. In this way, they are all united in their essential goals, the most important of which is to bring the living beings to the stage of cooperation in love of God. Obviously, our love for God will be shown by how much we cooperate with one another. Unfortunately, before we reach this advanced stage we are in the lower levels of understanding. This immature level of love can take on the characteristics of a blind and fanatical allegiance to a particular process of religious expression rather than attachment to real love for God. In this situation, one may proudly and unnecessarily feel that he is on the highest path, and then will denounce every other process and culture without the proper spiritual understanding of himself or others. This is nothing more than sentimentality and fanaticism. Real love of God, which also displays love for all other living beings, will not develop within a person if he or she harbors such a divisive mentality.

Have you ikscon culties ever heard of sant-sipahi? These demoniacs harming others' women is a crime against Akal Purakh.

We need Sikhs to extirpate this kind of genocidal demoniac activity once and for all.

Earth if for tapasya - not genocide - rape is Genocide

why americans hate dastar and kirpan - you are deviants - american culture is deviant.