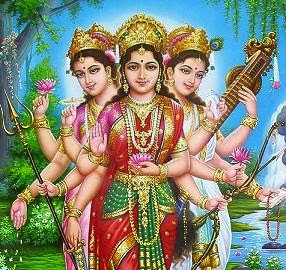 www.newsday.co.tt - Hindus are observing the holy period of Navratri, through worship and devotion. Navratri is a nine-day observance which has began last Monday (March 31) and will continue until April 8. Known as Chaitra Navratri this period starts on the first day of Chaitra (March April) month and ends on Rama Navami (the birth of Lord Rama) which is the ninth day of the month.
Navratri is one of the most prominent festivals of Hinduism. The first three nights are dedicated to the goddess of action and energy, Durga. Her different manifestations of Kumari, Parvati and Kali are worshipped during these days. Goddess Lakshmi is worshipped for the next three days in her various aspects as the goddesses of peace, plenty and bliss. Fulfillment is more important than wealth itself. As the goddess of wealth, Goddess Lakshmi bestows wealth, success and fame and fortune to her worshippers and devotees. 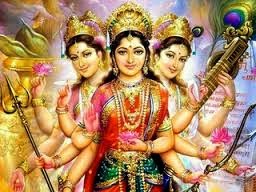 On Lalita Panchami (the fifth day), children gather all the books in the house before a sacred lamp and invoke the blessings of Goddess Saraswati. It is also the occasion for all artisans to lay down their tools before the goddess and seek her benediction upon their trade. Goddess Saraswati is the goddess of knowledge. The religious Navratri festival revolves around the three aspects of Goddess Shakti which are worshiped, with first three days devoted to Goddess Durga, followed by fourth, fifth and sixth days devoted to Goddess Lakshmi and last three days for Goddess Saraswati.
The devotees observe fasting for seven to eight days, and break their fast on the eighth day (Ashtami) or ninth day (Navami) of the festival, by carrying out “Kanya Pujan” or “Kanchika Pujan”. This involves worshipping and seeking blessings of nine young girls, representing the nine forms of Goddess Durga.

Since last Monday, 31 March, festive fervour has gripped India as thousands of Hindus began the nine-day fasting festival 'Navratri' (nine nights). During fasting, only fruits, milk, potato and other root vegetables should be eaten. Devotees are involved in chanting of mantras (Hindi words), and (bhajans) related to the Goddesses. All along this week, all-day services take place at temples throughout the country, with devotees making offerings throughout the day. This Hindu festival culminates with Ram Navami (this year falls on April 8); it is the ninth day of the moonlit fortnight in the Chaitra as per Hindu almanac, which usually coincides with the spring season and falls in the month of March or April. Vasant signifying spring and Navratri signifying nine nights; Vasant Navratri is celebrated in the spring season of March or April of each year for exactly nine nights. It is observed by Hindu’s and all other devotees all over the world. Vasant Navratri involves several days of fasting (performed by all the true devotees) and is dedicated to celebrating the nine forms of the mother goddess, Shakti and the birth of Sri Rama. The ninth day is also the day of the Ayudha Puja in the south of India. The Ayudha Puja is worship of whatever instruments one may use in one's livelihood. On the proceeding evening, it is traditional to place these instruments on an altar to the Divine. Our spiritual masters have taught us that we should make conscious efforts to see the Divine in the tools, instruments and objects we use every day. By doing this we are connecting our work, labor, study or profession to God and we can see them as imbued with the Divine presence. In this way we can be able to maintain constant remembrance of the Divine and also see our daily activities as an offering to the Supreme Lord. (Editor's note). 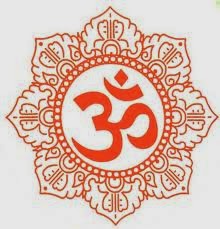 Navaratri includes the Sarasvati Puja and the Durga Puja festivals. “Nava” means nine and “ratri” means night. So Navaratri literally means nine nights. It is during these nine nights of festivities that the goddess is worshiped in Her different forms of Durga, Lakshmi and then Sarasvati. Durga ... destroys the anarthas or unwanted barriers that hold us back from our true spiritual potential. (...) Lakshmi .... gives one the wealth of good qualities, such as love, goodness, compassion, forgiveness, cooperation, nonviolence, devotion, purity, and the like. (...) Sarasvati ... gives one the intelligence, knowledge and wisdom by which spiritual realization is possible. ... After having removed our impurities, gained the proper virtues, and then acquired the knowledge of the Self, then the last day is called Vijayadasami, or the day of victory over our minds and the lower dimension after having worshiped the goddess in her three forms.