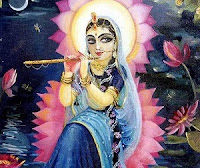 http://timesofindia.indiatimes.com - Traditional fervour marked Radhashtami celebrations in the city of Kanpur last Friday. Special puja along with 'bhandara' (huge gathering of people) and community events were organized at various temples to mark the occasion. The birth of Srimati Radharani, the consort of Krishna, is celebrated as Radha Ashtami. The day is celebrated 15 days after Krishna's birth celebrated as Janmashtami.
The idols of Radha and Krishna were traditionally dressed with flowers. The devotees chanted bhajans and many observed fast on the occasion. Special puja was organized at International Society for Krishna Consciousness (ISKCON) temple, at Bithoor where the main attraction of the celebrations was the 'charan darshan' of Radha followed by 'mangal arti'. 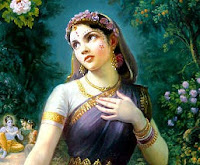 “Large number of devotees participated in the event to seek the blessings of Radha Rani,” said Dinesh Singh, media coordinator, ISKCON. At JK Temple, the celebrations began with aarati and was followed by bhajan and abhishek. Local communities organized bhandaras for the people to mark the occasion. According to astrologer Atul Mishra, “'Bhadrapada Shukla Ashtami', the eighth day of the brighter half of Bhadrapada month of the Indian calendar, is celebrated as Radhashtami.”
He explained: “The adya-shakti (primal divine energy) of Lord Vishnu was incarnated as Radhaji in Dvapar age at village Barsana of Brij region as daughter of Kirti and Vrishbhanu in Abhijit muhurta (considered as an auspicious time) in Anuradha nakshatra (a lunar mansion in the Indian vedic astrology).”

Sri Radha Ashtami, or Radhashtami (the birthday of Radha) also known as Radha Jayanti, is a major festival celebrated by Lord Krishna devotees. It falls on the eighth day of the Shukla Paksha (Ashtami on waxing phase of moon) in the month of Bhadrapad (August-September). This year Radha Ashtami was on September 13 (last Friday). Special prayers and pujas were held in temples all around the world. In their previous lives, Raja Vrishabhanu and Queen Kirtikumari (the parents of Radha) were King Suchendra and Queen Kalavati. They had obtained a boon from Lord Brahma that in the Dwapara Yuga, Goddess Lakshmi will be born as their daughter in the form of Radha. According to this boon, King Suchendra and Queen Kalavati took rebirth and Laxmiji was incarnated as Radha. The highest order of devotional service is represented in Srimati Radharani. If we want to render devotional service to our Guru we must learn to be servants. And Sri Radha is our example, because She is the queen of surrender. She is the queen of those going in the right direction, in the good direction. She is the Queen of those dedicated to serve the will of Krishna. (Editor's note). 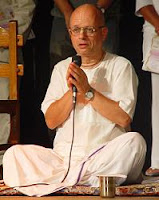 As Srila Sridhar Maharaj very beautifully says, Srimati Radharani is the bigger victim of the  exploitative power of Sri Krishna. Before her, He is the biggest exploiter and She is the most exploited. She is declaring this: “yatha tatha va vidadhatu lampato” I want Him to do with me what He wants to do. In this world, we usually go just in the opposite direction: we want to exploit the Lord. We were dazzled by the mystical power of a yogi, we get surprised by his ability to exploit. But this kind of inclination must be stopped and we must approach the sector of those who surrender. Of those who learn to depend. ... We pray for the continued deep absorption into the lotus feet of Sri Krsna. Oh, Sri Radha! You're the queen of those feet, they are Your property, and today is the day of Your supreme appearance. Under those feet we will find you busy, and in the service to the Yours feet, we will find our identity and true satisfaction.