THE GANGES: ALL PLAN, LITTLE ACTION

CLEANING THE GANGES: LOT OF
PLANNING BUT LITTLE ACTION TAKEN 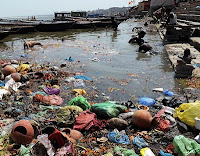 www.atimes.com - River Ganga, or the Ganges - the most sacred river for Hindus and India's national river - remains filthy despite whopping sums being pumped into the Ganga Action Plan (GAP) for the last 26 years, a damning report has revealed. “Since 1986, there is not even a 1% improvement in the river's condition despite millions being spent under the GAP,” concludes the study by Dr. Sandeep Kumar Behera, associate director (river basins and biodiversity), World Wildlife Fund (India). According to the scholar, who is also a member of the Prime Minister Manmohan Singh-led National Ganga River Basin Authority (NGRBA), the problem has only worsened over the years. Over 50 drains today carry sewage to the Ganga and Yamuna rivers at northern Allahabad compared to 13 before 1986, states the report. In addition, the 84 bathing ghats (banks) sandwiched between two tributaries - Assi and Varuna - are now “huge sewage drains.” GAP, an environmental initiative to clean up the Ganges fully sponsored by the central government started in 1979.

GAP Phase II was initiated in 1993 and covered 59 towns located along the river in the five states of Uttarakhand, UP, Jharkhand, Bihar and West Bengal. Over the years, the action plan has come in for flak from environmentalists and dubbed “a colossal failure” due to corruption, lack of technical expertise and a lack of environmental planning amongst the myriad government agencies handling the scheme. An audit in 2006 discovered that the project had met “only 39 per cent of its target of sewage treatment.” In short, the GAP remains all plan, no action. The magnitude of the problem can be gauged from the fact that the Ganga Basin hosts over 400 million people. Over 2 million people ritually swim and bathe in the river daily. Over 1.3 billion liters of sewage, it is estimated, is dumped into the river daily. Over 50 tanneries, 10 textile mills and several other industrial companies shove 37 million gallons per day waste, and only have to pay a small fee for it. Shockingly, there is no legal provision or punitive measure against dumping of waste into the river.

Originating in the Himalayas, the Ganges travels across 2,250 kilometers through India to the Bay of Bengal before merging with the Indian Ocean. It is ranked among the top five most polluted rivers of the world with its pollution threatening not only humans, but also more than 140 fish species, 90 amphibian species and the endangered Ganges River Dolphin. A raft of diseases plague the river's polluted waters, a lethal cocktail of garbage waste, sewage, human and livestock corpses and toxic chemicals. In 2011, spiritual guru Swami Nigamanand undertook a fast unto death demanding an end to illegal sand mining in the Ganga, especially in Haridwar where the Kumbh Mela, a mass Hindu pilgrimage, takes place. The governments, both in Uttarakhand and at the center, ignored his pleas. The swami breathed his last after fasting for 115 days. Perhaps the Indian government is waiting for the second Swami's death to be spurred in to the required action. We need to do something more for helping Mother Ganga! The Ganges is 2525 kilometers long. Along its course, 27 major towns dump 902 million liters of sewage into it each day. Added to this are all those human bodies consigned to this holy river. Despite this heavy burden of pollutants, the Ganges has for millennia been regarded as incorruptible. How can this be? Several scientists have recorded the effects of this river’s “magical” cleansing properties: Ganges water does not putrefy, even after long periods of storage. River water begins to putrefy when lack of oxygen promotes the growth of anaerobic bacteria, which produce the tell-tale smell of stale water. ... D.S. Bhargava, an Indian environmental engineer measured the Ganges’ remarkable self-cleansing properties: “Bhargava’s calculations, taken from an exhaustive three-year study of the Ganga, show that it is able to reduce BOD [biochemical oxygen demand] levels much faster than in other rivers.” Quantitatively, the Ganges seems to clean up suspended wastes 15 to 20 times faster than other rivers. If the material properties of this unbelievable river are mind boggling, I now wonder what precious spiritual gifts are waiting for a seeker of divinity?