THE BULL WHO CRIED
BEFORE BEING KILLED 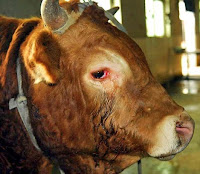 http://iys.radhagopinath.com - Knowing it was about to be slaughtered, a bull in Hong Kong did what many people fail to realize or are skeptic about when it comes to animals – he showed emotion. As reported by “Weekly World News”, a group of workers walked a bull to a packaging factory. They were about to slaughter him to make steaks and beef stews. When they were close to the front door of the slaughter house, the sorrowful bull suddenly stopped going forward and knelt down on his two front legs. The bull… was all in tears. How did he know he was going to get killed before he entered the slaughter house? He is even smarter than people.
Mr. Shiu, a butcher recalled, “When I saw this kind of so-called “stupid” animal sobbing and with his eyes in fear and sorrow, I started trembling.” “I called the rest over to see. They were just as surprised. We kept pushing the bull forward, but he just didn’t want to move and sat there crying.” Billy Fong, owner of the packaging factory said, “People thought animals didn’t cry like human beings. However that bull really sobbed like a baby.” At that time, more than ten strong men witnessed the scene and they were all touched. 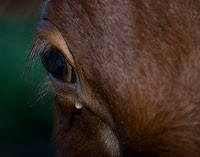 Those who were responsible for slaughtering even felt more touched and teared as well. Other workers working at the same slaughter house also came to see the crying bull. It was all packed with people. They were all shock by this scene. Three of them said they would never forget this crying bull when they slaughter other animals. With both man and animal crying, everyone knew that nobody could kill the bull. The problem was, what should they do with him? In the end, they raised funds to buy this crying bull and sent him to a temple, where the kind monks would take care of him for life. After the workers had made a decision, a miracle happened. A worker said, “When we promised this bull that we will not kill him, he started moving and followed us.” How did he understand people’s words? Mr. Shiu said “Believe it or not? This is real although it sounds unbelievable.” No doubt, this bull changed these butchers’ lives.
The pain of the bull before the imminence of his death, touched deeply those around him. Not only saved his life. He also gave a lesson in dignity. It is necessary to observe not only the fundamental rights of human beings, but also the rights of animals. Hopefully this story has in turn changed yours.

Have you seen the tears of fear and pain of the cow when she is taken to slaughter? Open your heart and try to perceive them. ISKCON Youth Services explains the moral of the news, "Maya is about to slaughter all of us and whatever we call mine by the weapon of Time. Unless we cry out and take shelter of the Holy Name of Lord, there is no other means to go back home, back to Godhead. Also the other lesson of becoming vegetarian. Two main qualities of the crying bull: 1. Determination (not move an inch towards Maya’s slaughterhouse). 2. Feeling totally Helpless and crying out (in our case to the Holy Names of Lord Krishna and Ram)". 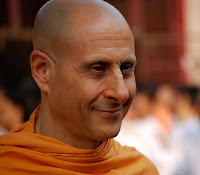 The cow is also our mother. We drink her milk when we are young and then when she grows old, human society cuts her throat, drinks her blood and eats her meat. Is that the way to treat your mother? Is that the way to treat mother earth, mother cow? Cow protection is not only very necessary for a proper spiritually based culture but is basic human ethic. Krishna protected his cows. In fact He was Gopal, a cowherd boy. In Nanda Gaon, in Ter Kadamba, He would play his flute to attract the cows. And each cow would hear his particular name being sung through Krishna’s flute. And now Krishna had 900,000 cows. ... when Krishna plays his flute, every cow and calf hears his or her name and they all respond intimately by mowing very loudly in ecstasy with tears in eyes and Krishna would hear each one the mows personally. Reciprocation of love.
This is Vrindavan. Simple living high thinking, based on the highest values of humanity. Based on the values of respect, love and devotion. And of course compassion naturally emerges from those values.

Decided to blog about this touching story.

How Can We Kill Creatures That Cry?